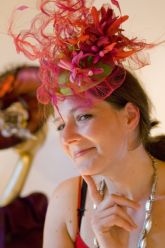 Have fun creating your very own hat, bonnet or chapeau and learn about the classic art of Millinery design and technique with Award-Winning Milliner Lina Stein. Explore the many facets of hat making as milliner for a day with your unique vision, be it serious in design or frivolous in concept.

Originally from Australia, Milliner Lina Stein has been based in Westport, Ireland for many years. For more than two decades she has been creating amazing hats and is recognized as a leading light in the world of Irish Millinery through her flamboyant and extravagant hats that signal her presence and individual creativity.

Lina’s background in “Classic theatrical Millinery” has provided her with the unique expertise to unite traditional hat-making know-how with modern design, creating hats of great sophistication and clean lines. Living on the western periphery of Europe has also been a major source of inspiration which has led Lina to developing new a varied methods of working with traditional Millinery materials. Her education has brought Lina around the world from Sydney – Australia, where she spent 2 years training in TAFE to Stuttgart in Germany, where she expanded her wealth of skills and knowledge to the pretty sea-side town of Westport, where she currently lives, teaches and works.

Her hats have been exhibited from Dublin,Stuttgart, Phoenix, Arizona to Los Angeles, and are always a sensation at race meetings and special events both in Ireland and abroad. She has won international awards such as the “Hatty Award 2008”and more recently the 1st prize in “The Best hat Competition” at the 2009 Galway Races.
She also now trains aspiring hat makers in the millinery arts. She is running master classes from her studio on a regular basis, and these are proving to be an enormous hit with anyone who loves fashion and creativity. Through the Millinery workshops that she holds in her “bijou” studio just outside Westport, she has inspired countless novice Milliners from both Ireland and abroad to take up the thimble, needle & thread and to try their hand at something new whilst enjoying every moment. She has also been taking her Millinery skills to an International level. Sharing her much sought after techniques with the Millinery diaspora!