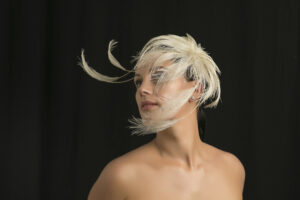 With an education grounded in Visual Communication Design, Anel’s interest in millinery stemmed from a 3-day hat-making course that caught her attention.

Choosing a complicated design made her intent on mastering the art of millinery and started her on a journey that included researching techniques, online tutorials, trial and error, and attending as many workshops as possible. Anel has spent over ten years perfecting her skills as a milliner and learning from expert milliners around the world.

Anél has won several international awards for her headpieces and has been honing her millinery skills in the twelve years since she first began making hats. She is known for her elaborate feather effect headpieces which she sculpts from sinamay into ethereal three-dimensional shapes which are often framed by dramatic wire silhouette sculptures.   With a problem-solving approach to millinery, Anél has overcome many of the technical challenges associated with working with sinamay and she shares her expertise generously in her workshops.

Check out Guy Morse-Brown's deal of the month!

Show me the block!
Protected with SiteGuarding.com Antivirus