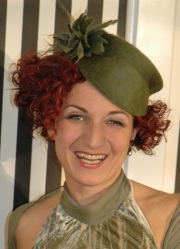 At an early age Christine Rohr developed a natural impulse to wear all kinds of things on her head. In 1991 she graduated from the millinery class of the famous Fashion School of the City of Vienna in Schloss Hetzendorf and ultimately decided to pursue this career. In 1992 she passed the hat making master exam, becoming the last master in Styria.

Since 1993 she has been working as an independent milliner in Vienna and Graz where she opened her well known workshop in Kalchberggasse / Graz, in 2004. In order to teach younger generations the foundations and techniques of this craft, she founded the Christine Rohr Academy – School for Millinery and Textile Design in 2009. She imparts her know-how in workshops and schools both nationally and internationally, as far as the Charles Stuart University in Wagga Wagga, Australia.

In addition to customized pieces and collections for her customers from Austria and
abroad, Christine Rohr also produces headpieces for theatre, film and events like the
Lake Festival in Mörbisch and the Life Ball.

The workshop program stretches over a 2 year period for those who learn the Modistenhandwerk and subsequently may want to take the final examination. It is also possible to book individual workshops as needed to deepen existing knowledge or simply immerse yourself for 2 days in the world of millinery.