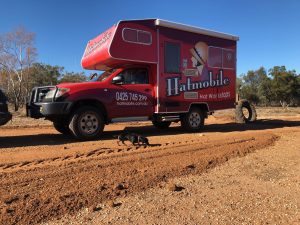 Waltraud Reiner has been travelling since 2001 around Australia and worldwide, teaching all techniques people want to learn. Her workshops are geared towards the need of the participating person rather than a fixed technique. Waltraud believes Hats are the art of the heart. She has been an advocate for emotional and mental well-being for many years and she uses hat making and weaving to support people.
Waltraud started out in Melbourne in the early 90’s where she founded the Melbourne School of Millinery which she ran for many years. She was part of developing the national millinery millinery certificate 1-4 qualification . In 2001 she founded Torb and Reiner which sold to the current owner Lindsay Whitehead in 2016.
At present waltraud is in her 3rd year of a psychotherapist masters which adds to her tool box as she travels around the country.
You can find her on Instagram and Facebook
Hatmobile / Hatweek PTY LTD
Travelling workshops
www.hatmobile.com.au
0425745299
Contact: Waltraud Reiner